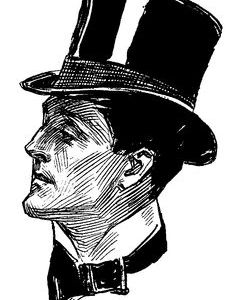 I would like it to be known, for the record, that I didn’t cry when they arrested me. As they put me in shackles, shamefully leading me away from my two boys, Thomas and Gerald, who at the time were 10 and 7, I did not let them see their father whimper or moan. Nor did I cry when they stripped me down and examined every inch of my body, inside and out. I did not cry when they threw me in a jail cell filled to the brim with men, all lunatics and lowlifes, all foul and rotten, teeth brown and hair matted, eyes glassed over. I did not cry when they brought me in front of a judge, again in chains, without any ceremony or courtesy, or when they flung me about and spoke of me as if I were no more than a sack of flour they were charged with delivering. The judge read to me the list of accusations against me in a stern and powerful voice. A voice that would surely cause even St. Peter himself to quake with fear, and still I did not shudder. I stood tall as I answered him and, without a waver in my voice, I said, NOT GUILTY. Although everyone, including my no-good court appointed attorney, looked away as if from a deformed child. Yet I did not cry.

I did not cry on the first day of my trial as they began trotting out every clerk, postmaster, school chum, or angry widow I had ever encountered in my life. Even though I was sick from mistreatment and malnutrition, weak and pale and gaunt, I wore my best suit and held myself strong and never let them see me with my head hung low.

I didn’t cry when they brought out the mother of those two darling children, Abby and Dean, as she began telling her horrid story for the judge and jury. The lot of them turned their heads in disgust as she spoke. A court reporter was even seen running from the courtroom, hand held tightly to his face.

My face remained stoic and my chin held high as she sat up in the witness stand and blubbered. I remembered it well enough. I wasn’t shocked when she recounted the brutality of their deaths. I could still recall the sounds their little fingers made as they scratched against the wood of that chest, screaming and begging to be let out. Until the fire had taken them and all that they screamed for was death.

The good mother had no memory of this, having not been there. She did, however, recount what she saw inside of that chest in great detail. I was impressed at her vivid memory and vibrant description as she sputtered on and on about the blackened, charred bones. She even described the globs of grey white fat that had melted off their bodies and congealed at the bottom of the chest. But what seemed to upset the crowd the most was her detailed description of the smell that lingered in the air around the chest. Most people think burnt bodies would smell putrid and foul; but burned flesh smells the same to the nose whether it is pork or human. Most would be horrified to know that their mouth would involuntarily begin to salivate, whether they smelled a divinely roasted Christmas ham or their own child, as the good mother of Abby and Dean had discovered. I believe it was at this point the court reporter chose to hastily leave the courtroom, hunched over and retching. I also heard the pathetic sounds of a woman in the courtroom audience who fainted. The judge was forced to call a short recess at this point to ensure the fair maiden with the weak sensibility would be all right.

Please make a note of this, that, throughout all, I shed not a single tear. I was no silly woman they could easily expose and dispatch. I was a strong and gifted gentleman, with above average intelligence. In fact, I have no doubt that I was the smartest man in that entire court room including the great and honorable Judge Hathaway who everyone seems so keen about. I have always had the unique burden of being the smartest man in any room I occupy. I am not bragging, I am simply stating a fact. As surely as you are reading this, know that I, through no fault of my own, have been given this gift in life and it is my cross to bear. And I assure you: at times it is a very heavy cross indeed.

Which is why I found what these bumbling imbeciles did was so… improper and uncouth. A man is his own king. He is master of himself, as well as of his family and his business, should be intelligent enough to possess such things. I pride myself on being a fair and just master of my kingdom. With wise and practiced hand I cared for my family, my business and myself so that we would all prosper and flourish. It is true that I have some more exotic tastes in my recreational needs, but I had always kept such things far removed from my wife and children. In all my years of indulging in my extracurricular activities, I had never involved my family, or allowed my business to suffer.

And then on the fifth day of the “Trial of the Century” as the papers were now calling it, my wife was called to the stand. And as much as I am loath to admit it, I, a full-grown man, master of my kingdom, was brought to tears.

Surely I had done wrong. I had been caught after all. Obviously I had slipped up and was here, paying the price of that mistake. However, my extreme intelligence demanded of me that I still fight the charges. I calculated the odds as the handcuffs clicked in place, and a judgment of not guilty was still very much in my grasp at that point. Provided I could maneuver around my appointed attorney and get a good grasp on the jury. I had little doubt I would have any trouble swaying them my direction, just as I had so easily swayed so many souls before towards a path that lead to their death.

But this, this was a dirty trick of them to pull. A low-handed manipulation contrived by the shortsighted and maladroit. I had not conceived that they would go to such lengths to humiliate me. I was ill prepared. And as I saw her favorite green bonnet crest the top of the crowd, and heard her soft sweet voice state her name to the bailiff, before even I saw her pale cheeks and innocent blue eyes, I could feel my confidence waver. I am sure this was their intent for bringing her here.

I stayed as strong as a man could be expected to in such a predicament. As soon as I could see her face and her eyes locked with mine, and I could tell, I could read there as plainly as if I were reading a paper, that they had spoken with her, they had read her my charges, indeed they had read to her the descriptions of all heinousness that they intended to pin upon my character. Instantly her heart reached out to mine and could feel the despair, the complete pity she felt… for me.

Despite myself I lost all composure. Pity?!? For ME?!? This sweet and gentle woman who I had cared for, who I had given two beautiful sons to raise, who I had provided servants and a large house to care for with all the newest household gadgets to assist her in her womanly duties. I had done for her all of this and yet, in the matter of days the papers and these callous men had swayed her to the point of feeling pity for me! 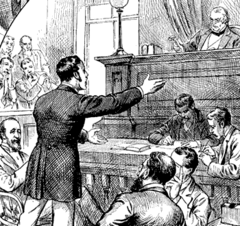 The feeling of defeat was strong inside me that day, I admit, dear reader. For if they could turn my beloved and devoted wife against me, what chance did I have in proving my innocence to the jury? As the day of questioning wore on I allowed my feelings of despair envelope me. They washed through me like waves as I heard my wife answer every question they had for her. Her honeysuckle sweet voice cracking when they came to describe the murders of the children. The judge was soft with her and allowed a brief recess after that.

As I was lead to my courtroom-holding cell my lawyer unceremoniously grabbed my elbow and hissed in my ear, “Why are you crying?”

I did not answer his foul breathed inquiry. I did not expect this foolish man to be able to grasp the subtleties that permeate the relationship between a man and his wife. Whether this man had a wife of his own mattered not, I was sure he was oblivious to such delicate matters nonetheless. So I felt it would be an exercise in futility to attempt to explain to him why this latest chess move by our opponent had hit so well on the mark. Instead of answering him I glared at him sideways, an evil and long stare I normally reserved for those who I was about to kill. I could see him visibly shiver and he jumped back.

Yes, I thought, see now whom you are truly dealing with. Trust me now that every moment I have not killed you is a moment I have exhibited immense self-control and restraint. Know now, little man, that I did do all that they accuse me of, that and more, and I would do the same to you if we had met under better circumstances. And know now, when you see a man such as myself, a man so far above your comprehension, when you see him cry, perhaps you should just let him be and not grab him by the elbow and interpose with your senseless question, breathed through rotting teeth and crumbling chapped lips.

His mouth open in an oh of surprise he released my elbow and the bailiff lead me away. Alone once again with my thoughts, I was finally able to reign in my emotions and face this new problem with a measure of self-control. It was at that point, and for the first time in my long marriage that I began to hate my wife.