You told me I needed you, so I never left your side.

You told me I couldn’t do anything without you, so I never even tried.

You told me I was stupid, so I didn’t think I could be smart.

You told me I was crazy too, so why are you surprised when I fall apart?

Sometimes she would look at him. He looked so small and frail, lying there under the thin hospital blanket. His skin sagged around his eyes. His arms were white and limp, like half-used bags of flower, discarded on the floor of a baker’s kitchen. Not like the arms Bethany remembered her father having. Those had been tight and red and thick like pork roasts.

His eyes didn’t open. The sound of the heart monitor beeped on and on. Steadily keeping track of his life, second by second.

“Would you like to speak to someone, dear?” a nurse asked her.

“There is a priest who comes by every Saturday and speaks with family members of patients here.”

“Shall I tell him to come by and see you then, dear?”

“What? Oh no, thank you. My father hates priests. He was excommunicated from the Catholic Church.” I shouldn’t have said anything. He wouldn’t like me telling someone that.

“Oh that is alright, dear. The priest doesn’t care what has happened in a person’s past, he is here to offer guidance and support.”

Bethany smiled at the innocence of the nurse. It wasn’t her fault she didn’t know. But Bethany knew, and she would be held accountable if he was to wake up and a member of his most hated organization was sitting next to him.

Politely she refused again and the nurse patted her arm. Concern lined the nurse’s mouth and brow. The look stayed on her face the rest of the time she fussed about the room and then finally she left.

Bethany looked at the man in the bed, whom she supposed really was her father, whether he looked like him or not.

Suddenly she heard his voice, deep and angry. Stupid. Selfish. You are fucking crazy you know that don’t you? If it wasn’t for me…. And then the voice faded.

“What do you want me to do, father?” she spoke out loud even though she knew it hadn’t really been him that she had heard. She had been watching his lips when she heard the voice and he had not moved. Yet she asked the still figure on the bed as if it had been him who spoke.

Bethany waited. She sat perfectly still and watched as his chest moved up and down and the heart monitor beeped away.

Suddenly the curtain flew open and Bethany jumped up. A young handsome doctor walked in with a clipboard. He introduced himself and smiled warmly at her. Bethany smiled back.

He began talking very fast about her father’s condition. Bethany tried to keep up, but it was hard. She was slow. She was easily distracted. She smiled at the doctor, though, and nodded as if she understood. She wasn’t worried if she didn’t understand. Her father would tell her what to do as soon as the doctor left. He always did. He was the smart one. He could pay attention and listen and then he would explain to Bethany what it was she was to do next.

She caught a few words the doctor said. “Brain deprived of oxygen” and “coma” and “no brain activity.” Bethany smiled and nodded. Somewhere deep inside her something twitched. She ignored it. It would go away. Her father would make sure of it. No use in trying to figure out what it meant. She would just be wrong anyway. Her father always explained to her how she was wrong.

Now the young doctor was looking at her with deep concern in his eyes. He had stopped talking. Bethany blinked and looked confused back at him.

“Can you tell me exactly what happened?”

Bethany thought. She remembered earlier that morning she had been making her father breakfast. She had been worried that she had overdone the eggs. She was so tired that while she had been cooking them she sat down. She must have dozed off, for all of a sudden her head fell and jerked her awake. She rushed and yanked the eggs off the stove immediately, hurriedly dumping them onto a plate.

Then she stood there a few minutes staring down at the slightly browned bottoms of the scrambled eggs. Inside her head she tried to predict what he would say when she

brought them to him. Would he yell? Would he scold her for being so careless? Would he get up and pace the room? Would she have to sit quietly and very still in the corner, hoping his fists didn’t strike out? Would he tell her how much he wished to hit her? Would he shake his fists and tell her how his knuckles burned with desire to lash out and strike her? It had been quite a while since he had actually needed to hit her. But he came close almost daily.

Bethany pictured this as she stood over the eggs. Then she pictured him not noticing the burnt eggs at all and scarfing them down so fast he barely breathed. If that happened he would probably want more. She wondered if she should put the pan back on the stove. If he noticed he would surely send her back to the kitchen to make more, and if he didn’t notice then he most likely would send her back into the kitchen to make more anyway.

In the end she turned off the stove, flipped the eggs over so the burnt side didn’t show, piled on the pork chops she had warming in the oven, swallowed her fear and took her father his breakfast.

“I remember I brought his breakfast to him in bed, just like I do ever morning,” she told the doctor. Then she glanced down at her father who still lay motionless on the bed. “Things get kind of fuzzy after that.”

A flash of red momentarily blinds Bethany and the memory of her father’s swollen face obscures her vision. Veins pulsating in his forehead, his lips purple, his eyes looked like goose eggs straining to get out of his head, threatening to pop out of his distorted distressed face.

And then the image was gone, as fast as it had come, and Bethany was standing in front of the concerned doctor again.

“Alright, well we can wait to see if there is any improvement over the next 24 hours, but after that I am afraid we are going to have to move him to the Hospice Wing”

After the doctor left, Bethany sat down again and picked up her knitting.

You could have done something. Her father’s sharp and demanding voice rang out suddenly in her head. Bethany did not look up from her knitting. She knew it was only an echo of her father. It wasn’t really his voice. She was sure of that.

Yes! I was choking and you just stood there and watched.

Again the vision of her father’s crimson engorged face swam into view again. Around his eyes was purple now, his lips a deep blue. His hands were wildly scratching at his neck. He was so frantic that he had drawn blood. Long ribbons of flashing red rubies ran down his neck. And Bethany simply stood there and watched. Motionless and soundless she stood there and watched as the piece of pork chop slowly strangled him.

What am I supposed to do? She remembered thinking that as she watched him fall to his knees. I am too stupid to know the right thing to do. You told me so. What am I to do?

Then, in desperation her father had lunged at her. With hate in his eyes he had reached out to grab her, as he had so many times before. But the lack of oxygen made him slow and weak and Bethany easily sidestepped his attack.

Then she spoke out loud, “What father? What do you want me to do?” and as she spoke a smile grew across her face as her words cut the air between them. His eyes had been pleading then, begging her, and her smile grew. He had motioned for her to help him, to go behind him. He had made the gesture of performing the Heimlich, but Bethany just stood there and blinked at him. “What? I don’t understand,” she had said, her grin unbearably big.

Then that hate was back in his eyes and he lunged again, but as he did, he fell and landed face first on the ground in front of her. Bethany hadn’t needed to even dodge that attack. Then he laid face smashed into the carpet. His body jerked and flopped about. It looked as if he was attempting some new break dance move.

Bethany had watched and smiled. She watched as he twitched and gargled and bucked. She watched until he finally stopped moving and the only sound in the room was his shallow struggled breathing. And then she went to the kitchen and made herself some eggs. It seemed only right; she was going to need her strength for the day. It looked like it was turning out to be a long one.

After she was done, she went back to the bedroom and stepped over the near motionless body that still lay on the floor. She picked up her father’s phone that sat by her father’s bed and she called 911. The ambulance arrived quickly, and they immediately went to work on him. But he had been with little to no air for so long, at that point, there wasn’t much they could do.

Now, sitting next to his body lying on the hospital bed, she continued to knit. Over, under, through, around, she quietly said to herself as she worked.

You little bitch! You let me die! I will tear you apart for this! You’ll see. I can’t trust you. You awful little selfish pig! How can you do this to me! How dare you! What will become of you? You can’t make it on your own! You are too stupid, too weak, you can’t work, and you will burn out. But before that you will blow all your money on clothes or some other such stupid thing. Without me there to tell you what to buy and when to pay the bills you will drown. You can’t make it without me! 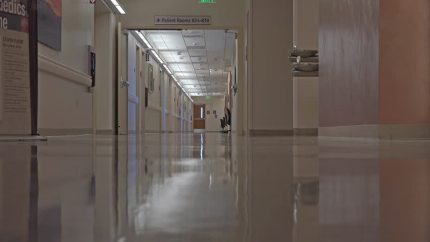 But a strange thing happened as Bethany heard her father’s voice, it was as if it was coming from a long hallway. And she was moving away. It got softer and softer. And the farther away she got the more she was sure he was wrong. The more she was certain that she would be just fine with out him.

At last the voice faded away entirely and Bethany was left in wonderful silence. She sat next to her father, or the thing that used to be her father, and she knitted and she wasn’t sad, not one little bit.