And so a group of authors set out to create such a new world and the people who would inhabit it. We shared ideas, hammered out a backstory, drew maps, adapted technology, designed cities, and invented new species. Then we wrote stories about the people and places of this new world we’d created. We wrote in different styles, in different genres, and in different forms, and we had so much fun we have opened up this world to any other author who would like to write their own stories and add to the Paradisi Chroniclescanon.

In the last decades of the twenty-first century, ten families seeking to escape an increasingly devastated Earth focus their power and wealth on constructing spaceships that will allow a select few to leave Earth and colonize the world they call New Eden. Here, on their new home in the Paradisi System, these Founding Families hope to avoid the environmental and political disasters that were destroying Earth. But they find that the world they claim for their own is already inhabited, and the Ddaerans, although human in their appearance, possess abilities that the Founders and their descendants find both intriguing and frightening … 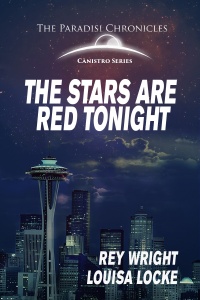 The Stars Are Red Tonight

The year is 2092 and Earth is slowly dying, but Trevor and Saya are holding their own. They have steady work in Seattle and unlike ninety-nine percent of the planet’s residents, they aren’t starving, their city isn’t underwater, threatened by fire, ravaged by disease, or under military rule. Their jobs are boring but at least they are safe. That is until an encrypted flash drive falls into their hands. Suddenly their lives are upended and nothing will ever be the same again.

The Stars are Red Tonight is part of the Paradisi Chronicles; Canistro Series, a science fiction adventure through time, space and generations, brought to life through the creativity of multiple authors. In this romantic suspense novella, Ashley Angelly and Louisa Locke introduce the Kuttners, one of the ten founding families who escape a dying Earth to colonize New Eden, a planet a galaxy away.

Can be purchased here: The Stars Are Red Tonight

Twelve authors, including myself, combined our ideas to create this collection of incredible short stories. Each one different and captivating, these stories span from the first launch leaving Earth to generations after humans have landed and colonized New Eden.

My story, Aderyn Tanllyd, is about two Ddaeran brothers, separated as boys by the New Eden Founders. Reese, the elder, has been searching for his young brother for the past ten years. Now he has found him. But how will he save him?